At least two are dead and hospitals have treated at least 48 people in the aftermath of bombs exploding at the Boston Marathon. A third explosion has been confirmed at the JFK library.

Update: CNN confirms more than 110 people have been injured.

“My thoughts and prayers are with those who have been injured,” Patrick said in a statement released this afternoon. “I have been in touch with the president, Mayor Menino and our public safety leaders. Our focus is on making sure that the area around Copley Square is safe and secured. I am asking everyone to stay away from Copley Square and let the first responders do their jobs.”

[Update, 4:45 p.m. ET] It appears that so many people are using cell phones in the center of Boston, consistent service is hard to get – and the overload is hampering the investigation, two federal law enforcement sources tell CNN.

“Outside MGH: Head of emergency medicine says 19 have been brought to MGH, six critically injured, some with amputations,” she posted to Twitter.

[Update, 4:37 p.m. ET] Organizers with the London Marathon, scheduled for this coming Sunday, have taken notice.

“We are deeply saddened and shocked by the news from Boston,” London Marathon officials said Monday. “Our immediate thoughts are with the people there and their families. It is a very sad day for athletics and for our friends and colleagues in marathon running. Our security plan is developed jointly with the Metropolitan Police and we were in contact with them as soon as we heard the news.”

[Update, 4:30 p.m. ET] Boston firefighters have found what they believe is an unexploded device after the blasts, a government official said, according to CNN’s Joe Johns. 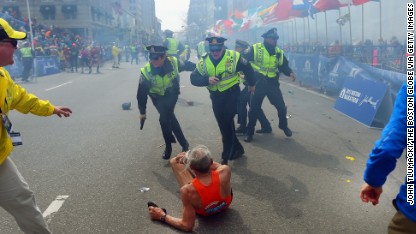 Police officers with their guns drawn hear the second explosion down the street. The first explosion knocked down a runner at the finish line.

Silva told the news outlet that he was near the finish line when the explosions happened. He said he saw a number of injuries in the area where spectators were. He saw “someone lost their leg,” and he said “people are crying, people are confused.”

“It was just an explosion, it came out of nowhere,” he said. “There are multiple injuries. I saw dismemberment, I saw blood everywhere. People are badly injured.” 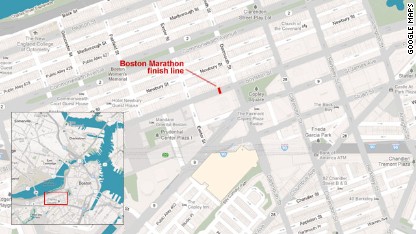 [Update, 4:19 p.m. ET] We have a new injury count: According to hospital officials, at least 28 people are being treated for injuries connected to this afternoon’s blasts near the Boston Marathon finish line.

Nineteen were being treated at Massachusetts General and nine at Tufts Medical Center, officials at those facilities said. Boston police earlier put the number of victims at two dead and 22 hurt. 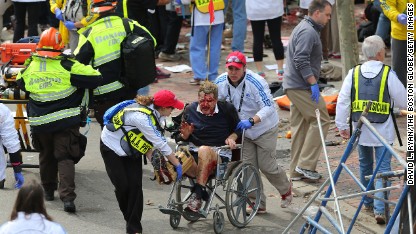 A person who was injured in an explosion near the finish line of the 117th Boston Marathon is taken away from the scene in a wheelchair.

Frucci said he heard the blasts.

“After the dust settled, (I saw) six or seven people strewn about the area where the second (explosion) was. 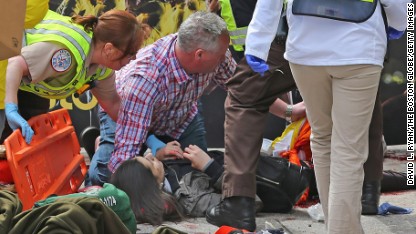 Emergency personnel respond to the scene after two explosions went off near the finish line of the 117th Boston Marathon on April 15, 2013.

[Update, 4:11 p.m. ET] A Red Cross website has been established to help people find loved ones in the area.

“Individuals can register themselves as safe or search for loved ones,” Massachusetts’ emergency management agency says.

[Update, 4:08 p.m. ET] At least two people have been killed and 22 are injured in the apparent bombings near the finish line of the Boston Marathon, Boston police say. 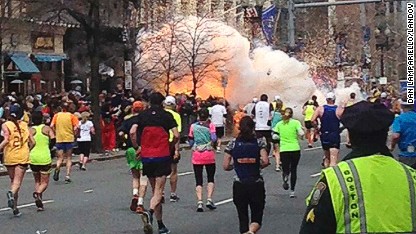 An explosion rips through a location near the finish line of the Boston Marathon.

[Update,3:57 p.m. ET] On their Twitter page, Boston marathon officials made this announcement: “There were two bombs that exploded near the finish line in today’s Boston Marathon. We are working with law enforcement to understand what exactly has happened.”

[Update, 3:53 p.m. ET] New York is taking precautions as a result of the explosions at the Boston Marathon.

In a written statement, New York Police Department Deputy Commissioner Paul Browne said: “We’re stepping up security at hotels and other prominent locations in the city through deployment of the NYPD’s critical response vehicles until more about the explosion is learned.

[Update, 3:45 p.m. ET] Paramedics were treating several victims at the scene, and police ordered onlookers to back away from the area. Troops from the Massachusetts National Guard were assisting police as well.

Onlooker Josh Matthews said he heard the blast, then saw police running toward the scene.

“We just heard a lot of sirens, and people were kind of frantic, and it was a bad situation, so we got out of there,” he said.

[Update, 3:37 p.m.] Four victims of explosions near the Boston Marathon finish line are at the emergency room at Massachusetts General Hospital, a hospital spokeswoman told CNN. She had no information about the victims’ conditions.

A pair of explosions rocked the finish line at the Boston Marathon on Monday afternoon, injuring at least a half-dozen people, a CNN producer at the scene said.

The blasts occurred a few seconds apart, shrouding downtown Boston’s Copley Square in smoke. Paramedics were treating several victims at the scene, and police ordered onlookers to back away from the area, CNN Producer Matt Frucci reported.

The explosions occurred about 2:45 p.m., about an hour after the first runners had crossed the finish line, Frucci said.